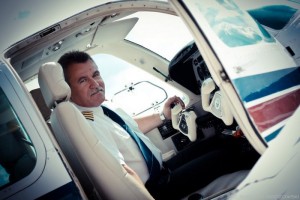 A professional physicist. He started his aviation career with gliders in 1976. He is a celebrated glider pilot and  holder of the honorary golden badge with three diamonds. He has spent more than 5,000 hours in the airborne, including 2,000 hours as a certified flight instructor. He has worked in the Polish Aero Club for many years, holding various positions. Started as a glider specialist, and eventually became the director of the Aero Club itself. Has been involved with UnitedSky since 2007.